Team BDP successfully smashed their fundraising target of £1,150.00 with a total of £1,950.00 raised. Business Data Partners are thrilled to announce they have matched the amount raised by the team, bringing the grand total of money raised for SANDS (Stillbirth and Neonatal Death Charity) Lothian to £3,900.00! The money raised will be supporting the work SANDS does to  improve the care bereaved parents receive, promotes research to reduce the loss of babies lives, and provides training and education for medical professionals to enable them to provide the best support to those affected. Read on to hear from David Bull, Senior BDP Consultant, on the teams 24 hour National Three Peaks Challenge 2018!


On Friday 6th July, a team of consultants from Business Data Partners embarked upon the National Three Peaks Challenge, climbing the highest mountains in each of Scotland, England and Wales, and traveling between them (nearly 500 miles by road) all within 24 hours.

The group gathered in Edinburgh for the minibus drive up to Ben Nevis in glorious sunshine (a typical Scottish summer’s day, honest). Spirits were high, helped by 90s dance anthems blaring over the radio, and fish and chips at Tyndrum.

We were planning a late afternoon start, to minimise the time we would later spend walking in darkness, so as the clock ticked down to 4:30pm we had time to ensure we were properly fed, watered and sun-creamed and that everyone had all the kit they needed. Time for a quick picture, and then we were off! 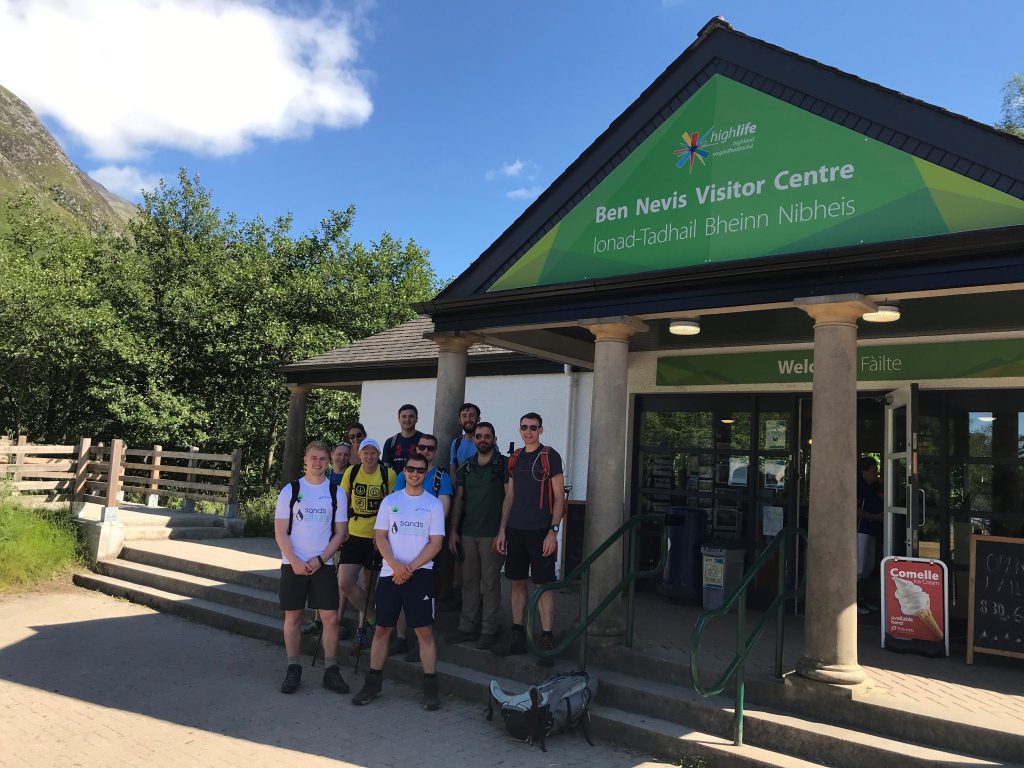 Although we were moving towards evening, the sun was still beating down and the temperature showed no signs of dropping. This made the walk hot and sweaty, but happily it meant near perfect visibility, and during water breaks we were able to enjoy spectacular views over the Highlands. This is not always the case on Ben Nevis so we were very lucky. 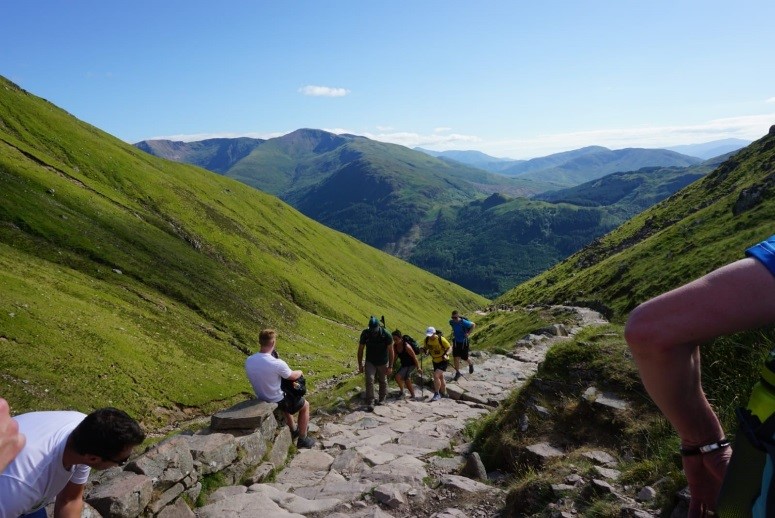 We reached the summit cairn in a little over two and a half hours, having made good time on the ascent. We had allowed five hours for the first hill, so we were well on track as long as we also moved well on the descent. A quick picture on the summit, and a pause to put on some extra layers, and we set off again.

The descent went well, and we found ourselves back at the van in four hours and forty minutes, twenty minutes ahead of schedule. Unusually, there had been no midges on the hill, but this was not the case back at the van, and it was a scrabble to get ready, whilst donating blood to the insects of north west Scotland. We were able to replenish ourselves with pasta which had been lovingly prepared whilst we were on the hill by our tireless driver/ chef/ Mr. Motivator, Tony. Then it was back into the van, and a six hour non-stop journey through the night to the second hill of the day, Scafell Pike. 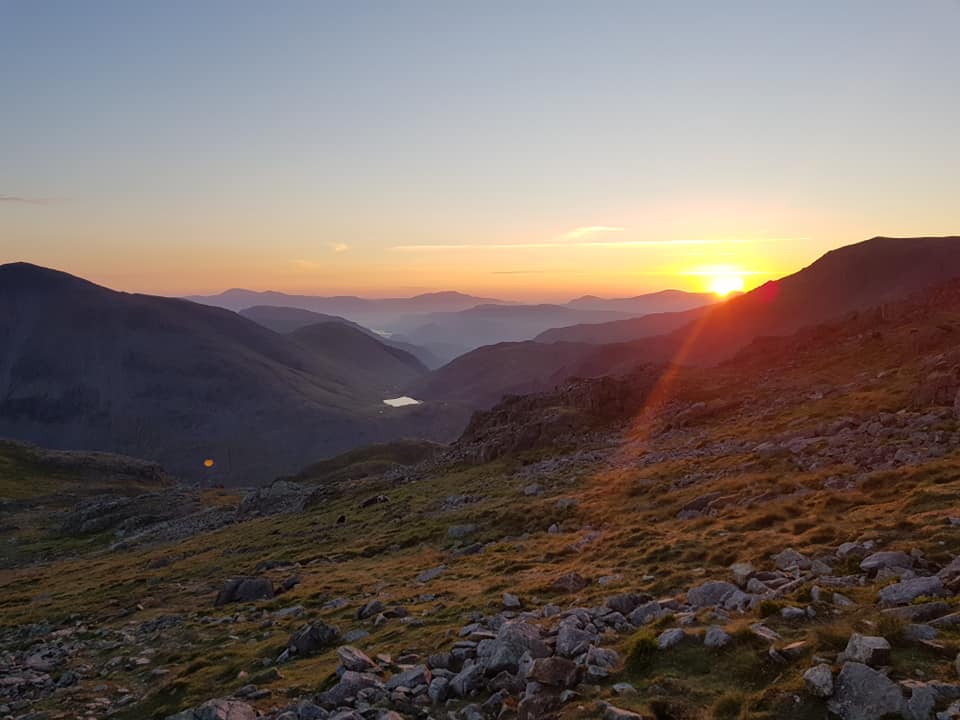 Arriving at 3:10 am to the bottom of Scafell, we hurriedly prepared ourselves by the light of our head torches and set off up the hill, still ten minutes ahead of schedule. Beginning the walk in the dark was psychologically tough, but the sunrise over the Lake District as we moved to about 2000ft made it worth the effort. The hill was much quieter than Ben Nevis had been, with only a couple of other Three Peaks groups, and some shepherds with their dogs keeping us company. 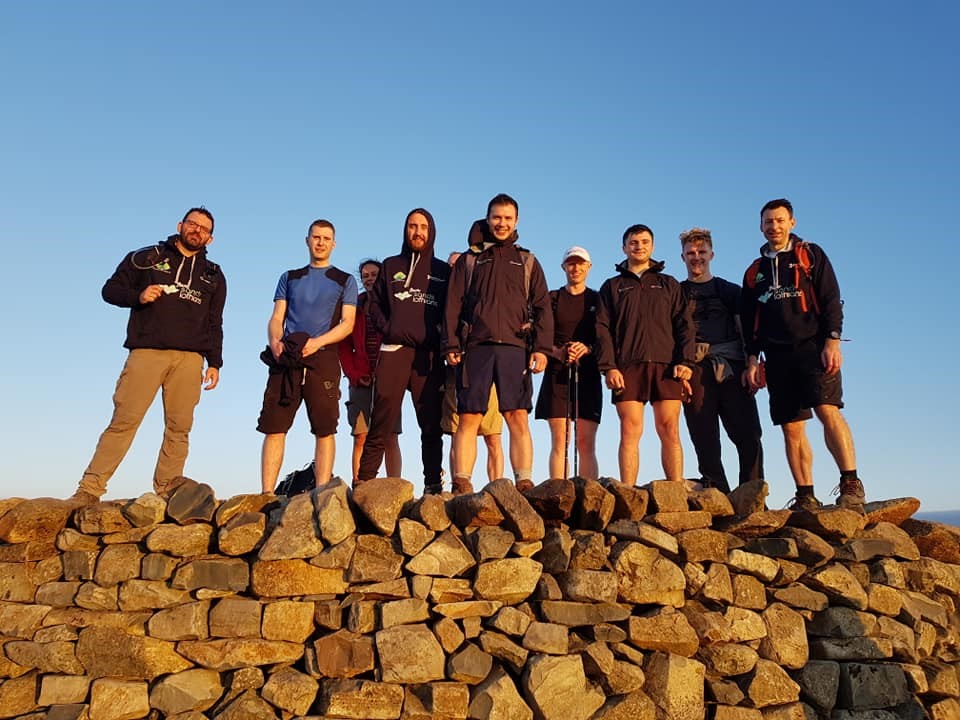 The obligatory celebratory summit picture was followed by a steep, rocky descent, which was tough on the knees. Despite having to dodge around several sheep and cows, we still kept slightly ahead of the required pace, taking 3hrs 40 minutes to complete the hill, finishing at 7.00am, half an hour ahead of schedule by now. Straight back in the bus, and off to Snowdon. We were two thirds of the way there!

With the drive to Snowdon being in daylight, and energy levels being higher than the overnight journey, we cranked up the juke box again, with some RnB classics and once we crossed the border, our very own Wales themed mega-mix. Despite hitting some traffic, we arrived at Snowdon twenty minutes in front of where we needed to be.

Being another hot sunny day, and a Saturday afternoon, the final hill was incredibly busy all the way up. There were queues at some of the narrower, more scrambly sections which was frustrating, and the weather was really starting to warm us all up. We were grateful when it started to cloud over as we neared the summit – how very British, always finding a way to complain about the weather! Around the summit we came across a group who were pushing a friend in a specially adapted wheelchair all the way up and down Snowdon – a truly remarkable feat which put our struggles over the course of the day in context. 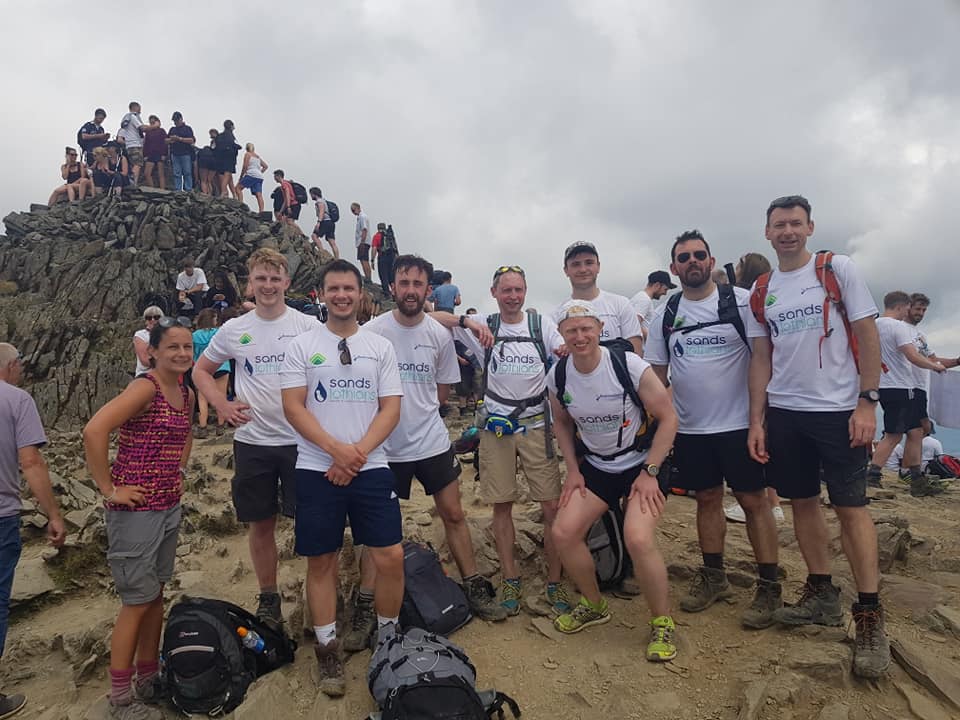 On the final descent some of the group decided that, with a little time still in hand, they would take a longer, more gradual route down the mountain. Some even stopped off for a swim. As it turned out, we had timed the whole day more or less perfectly and had all finished by 4:15pm, fifteen minutes to spare! It had been a long, tiring but ultimately rewarding day, and a great sense of achievement for all of us. We celebrated into the night, and made our weary way back home the following day.

And so – we did it! What a great sense of achievement for all of us, and the lack of sleep and sore feet were worth it. We successfully smashed our fundraising target of £1,150.00 with a total of £1,950.00 for our charity SANDS Lothian. With Business Data Partners matching the amount raised, this brings the total raised to £3,900.00! 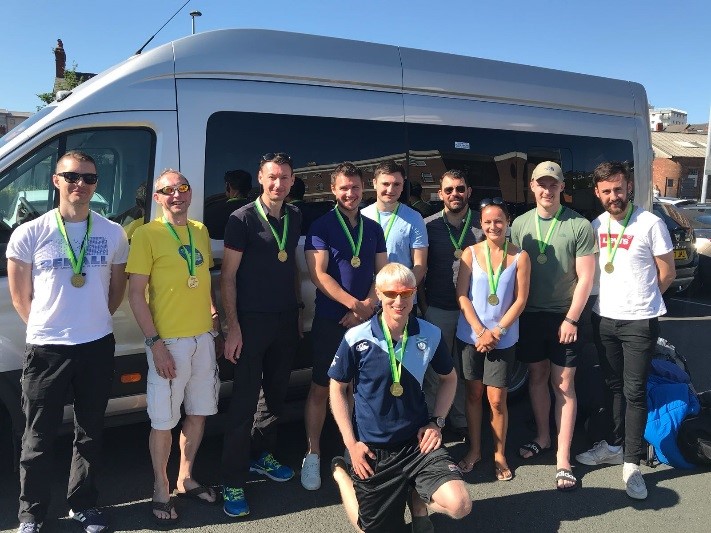